Operations
CSG-3 strives to maintain a predictable yet exciting schedule which keeps its members engaged by continuously honing their skills. This schedule begins with work ups which normally follow the conclusion of deployment. Work ups are designed to act as a refresher for existing members where lessons learned are applied to standing procedures and tactics are adjusted based of their efficiency and lethality during deployment.

Recruitment
This is also a time when CSG-3 looks to expand it's ranks by recruiting new virtual aviators hungry to get into the fight and join the family. Recruitment of individuals with basic knowledge will normally open three weeks leading up to the conclusion of deployment will continue throughout work ups.

Recruitment of individuals with a more thorough understanding of aircraft systems and tactics requiring less instruction will remain open throughout the training and deployment cycle.

Committees
Each of the groups major facets are managed by various committees. These committees are chaired by one individual and composed of volunteers from across the wing. These committees include Training, TacOps, Web Management, Public Affairs and Mission Development.

Training: The training committee focuses on the creation and management the groups training programs. They also are responsible for the management of the groups various pilot upgrade programs such as Landing Signal Officer, Aggressor, etc.

TacOps: The TACOPS committee is tasked with maintaining tactics, techniques and procedures for aircraft flown by CSG-3 and adapting these TTP's where necessary to ensure continued lethality.

Web Management: This committee is responsible for the management of the wing's web based platforms including our dedicated servers, website, and mod repository which contains squadron liveries and third party addons used by the group.

Public Affairs: The public affairs committee is responsible for outreach and community engagement with the DCS community. They also are tasked with managing recruitment efforts.

Training
The strike group training program is broken down into three phases. These phases are designed to progress from basic understanding to non-combat related flight tasks culminating with combat related tactics. Within each of these phases are a series of skill-sets which must be demonstrated which ultimately lead to completion of the phase.

During work ups, a new pilot's progression through the training program is based upon their own initiative. They are invited to attend squadron training sessions throughout the week and to schedule one-on-one training sessions with a winged pilot. As a trainee becomes proficient in a series of skills, their ability to perform the skill is observed in a check ride. Check rides are a means for CSG-3 Training Cadre to test the knowledge of a student pilot to ensure the material is absorbed, understood, and that the student can demonstrate techniques.

During work ups, squadrons will progress through a refresher training program very similar to that which the new pilots must complete. The process differs, however, in that winged pilots will participate in weekly missions structured in much of the same way as missions while deployed. Each training mission will be debriefed and areas of weakness will targeted for follow-on training. During this time scheduled training sessions will occur 2-3 times a week. 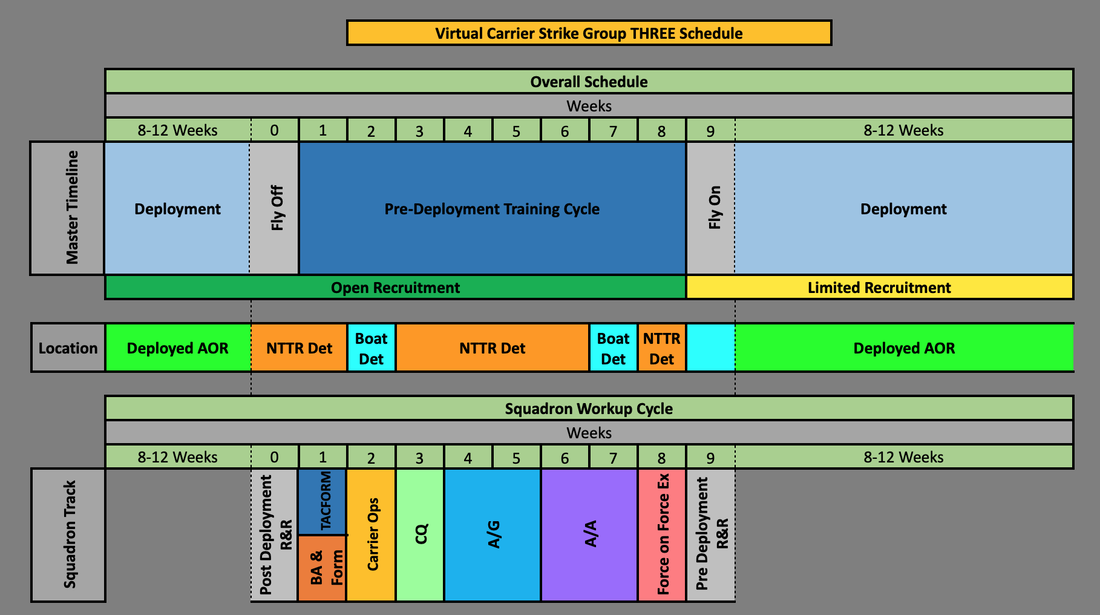 vCSG-3 Squadron Training Program
SABER GOLD
At the conclusion of work ups, CSG-3 conducts a large scale force-on-force exercise in the Nevada desert known as Saber Gold. This exercise is designed to span a week to several weeks and tests the strike groups abilities to effectively conduct operations in the air-to-air and air-to-surface arena. Saber Gold also serves as a means for the strike group to identify any last minute deficiencies in tactics and procedures to be corrected prior to deployment.